Mr. Yamamoto Hiroyuki was impressed by the institution's high level of technical equipment. 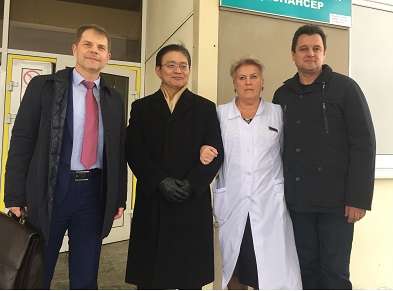 Regional Cancer Center was visited by the Consul General of Japan in Khabarovsk, Mr. Yamamoto Hiroyuki, who came to the Angara region to participate in the opening ceremony of the Japanese war prisoners memorial in town of Listvyanka.

Japanese guest made a tour around the center and got acquainted with the problems and issues that the medical institution solves. He was very surprised by a large number of the most advanced Japanese equipment at the center has. The endoscopy unit, for example, is not only fitted with medical equipment from the Land of the Rising Sun - its very structure follows the structure of similar unit in the Tokyo Cancer Center. Not less Consul General was surprised that a full-fledged department of bone marrow transplantation functions in a regional clinic.

Mr. Yamamoto Hiroyuki highly appreciated the way Irkutsk oncologists use modern IT-technology. Thanks to that telemedicine office lets us perform case conferences and consultations with colleagues from France, Germany and China in real time. And large plasma screens in the conference hall show the "image" from video cameras installed in the operating unit.

Also, Mr. Yamamoto Hiroyuki was struck by how many famous Japanese doctors have visited Irkutsk Regional Cancer Center in recent years. He saw the photos and videos of their presentations conducted at the Center.