Not so long ago a patient who would be considered incurable in many other hospitals was discharged fr om Regional Cancer Center. However, Irkutsk doctors saved his life, having performed a complex surgery, which was possible only thanks to a combination of remarkable workmanship, the most modern equipment and excellent organizational work.

- In addition to the fact of the operation performed at the highest level it is very important that our clinic has adopted a new technology called intraoperative radiation therapy, - says head of the cancer department of surgical treatment of tumors of the head and neck Maxim Mirochnik. 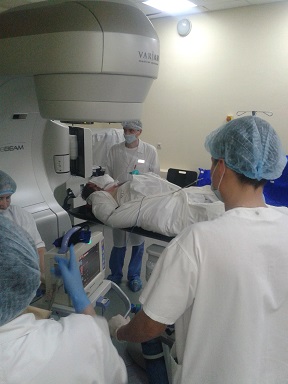 It all started when a 48-year-old patient came to the clinic with a diagnosis of "malignant tumor of the mandible mucosa, 4th stage." He was treated here a year ago, having gone through radiation therapy and surgery: the removal of the jaw with the following prosthetics. But, unfortunately, he had to revert to oncologists due to relapse. And, what is more unfortunate, this relapse occurred in such a complex anatomical location as the infratemporal fossa: to remove the tumor radically and with the necessary reserve, without killing the patient was nearly impossible. The patient was examined by the academician I.V. Reshetov. In order to save this man Irkutsk oncologists were suggested to master a new technology.

First, the tumor was surgically removed, and the lack of operation radicality was offset by radiology techniques. Open wound, from which healthy tissue was took aside, was irradiated by a linear accelerator - the latest device, which replaced the previous gamma devices in recent years. However, not every cancer clinic can afford such equipment: linear accelerators are characterized by not only the highest accuracy of ionizing radiation beam, but also by a high price. The first device of this kind has appeared in the Irkutsk region only last year - it was purchased for the Angarsk branch of Regional Cancer Center. Moreover, this year, the management of Cancer Center plans to begin the construction of the new radiological building in Irkutsk, that will be equipped with the same machinery.
Linear accelerator let the doctors treat peripheral region after tumor removal with a pinpoint accuracy. Radiation absolutely did not affect healthy tissues, but those immediately adjacent to the tumor and able to cause a relapse received a killer dose, and this dose was delivered just once. Gamma unit, for example, would have required several sessions, with 24-hour breaks in between. However, in this case great efficiency was required. The fact is that immediately after the surgery, the patient under anesthesia was transported to the radiotherapy department and after irradiation again returned to the operating room, wh ere the wound was covered by healthy tissues.

However, even such a "smart appliance" as a linear accelerator does not work by itself - it requires as smart professionals.
- In order to properly calculate the configuration of the radiation field, performing "virtual" operation beforehand was necessary. The patient's images taken at the MRI and CT scanners served as the basis for it - they were used for the simulation. This task was brilliantly solved by our radiologists and medical physicists. Another big issue was to make our further real actions coincide with the "virtual". Because there is a number of blood vessels supplying the brain and the nerve plexus next to the tumor – there was no damaging them by any means! And this problem was solved as well: planning and implementation coincided almost 100%. - Sums up Maxim Mirochnik. - However, this technique is so complicated in technical and organizational terms, that we could refuse to risk patient's life like that. But, the head physician of the clinic Victoria Dvornichenko believed in us more than we did. She insisted that we would carry on with the operation. The surgery was successful, thanks to the coordinated teamwork of surgeons, radiologists and anesthesiologists. The patient was discharged with recovery and receives preventive treatment.